As I mentioned in my last post about Kip Andersen at the Vancouver Veg Expo, I am sharing all the lovely goodies we splurged on last weekend at the 2018 Vancouver Veg Expo!  If you want to check out what we bought last year, click here.  I won’t be writing full reviews on all of the products as we haven’t had time to try them all yet, but if you are interested in finding out more, please leave me a comment and I will get back to you about it.  I’ve also left links where I can so you can check out the products yourself if you’re interested.

Here is an overview of what we picked up (not including the flowers, haha): 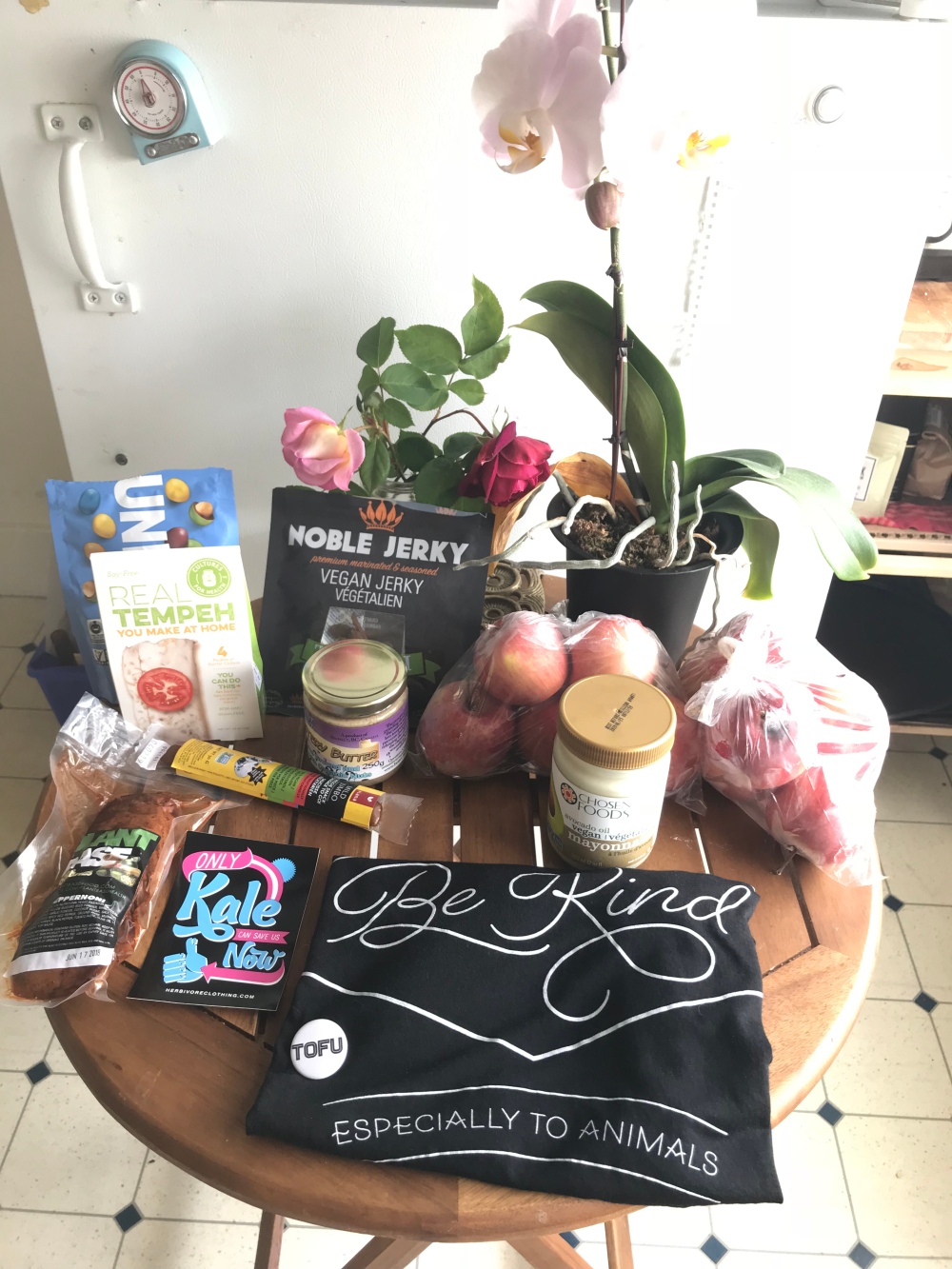 We also picked up some vegan/gluten-free bread that I forgot to include in this overview photo.

Here is the vegan/gluten free bread from  Little Northern Bakehouse.  As far as vegan/gluten free breads go, I haven’t really tried that many, mainly because it’s only recently that I’ve decided to cut way back on gluten (please check out why in my post about my visit to the Holistic Nutritionist) and because it is really hard to find gluten-free AND vegan bread!  I love the GF/vegan bread from the local Two Daughters Bakeshop here in North Vancouver, but the loaves are very small, and dense.  This bread from Little Northern Bakehouse is more conventional in terms of it’s size and consistency.  I prefer this bread toasted as opposed to using it for a sandwich.  It sort of fell apart when I used it for chickpea salad sandwiches.  However, the taste is really nice and I would definitely purchase it again if I see if it in any local grocery stores.  I haven’t tried the buns yet, but they did have samples of them at the Expo and they were delicious!  That’s what prompted me to buy both the bread and the buns.  The buns are sitting in my freezer waiting for me when James decides to make veggies burgers 🙂 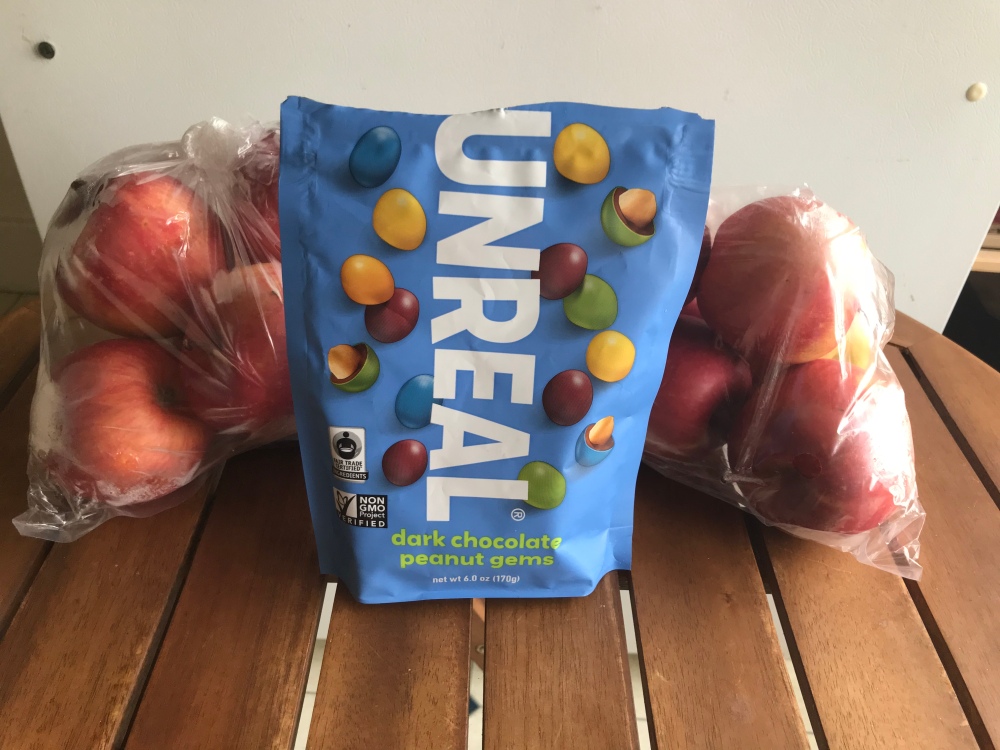 It’s kind of funny to post the Unreal Dark Chocolate Peanut Gems with the Organic Gala apples from the Okanagan!  When I was taking the photos, I was thinking Sweet things!  I first heard about the Unreal Dark Chocolate Peanut Gems from Lauren Toyota.  She was raving about these Vegan M’nMs and I couldn’t wait to get my hands on them!  I only wish I bought more!  Probably good, that I didn’t for my skin’s sake, but yes, these did not last long.  They were super tasty, and I will for sure be heading down to Vegan Supply to pick up some more soon.  When I decide to go see a movie in theatres this summer, I’m going to be sneaking these babies in, hehe.  As for the apples, unfortunately I don’t remember the vendors who sold these.  But we did stock up on 2 lbs of apples because we didn’t get a chance to go to the Farmer’s Market last weekend so we were happy to be able to get one of our staple grocery items at the Expo.  They have not disappointed us; they are crunchy, juicy and one of my favourite snacks.

It woudn’t be a Veg Expo haul without some vegan meats.  As you can tell from the photo, we dug into that Noble Jerky right away, and it did not last long!  James remarked that it tastes a lot more like beef jerky than some of the other vegan jerky we’ve tried.  I think what sets it apart is the texture; it’s a little tougher and drier (not in a bad way) than the others we’ve had.  Some of the others we’ve tried have been a little spongy.  I just wish we’d bought more flavours!  We haven’t tried the Plantbase Peppernoni just yet, or the Viana Jumbo Mild Veggie Sausage but I can report back on those later.  We bought all three of these products from the Vegan Supply Booth.

Now we’re onto spreads.  We were actually kindly gifted the Chosen Foods Vegan Mayonnaise; they weren’t technically selling them, they were just giving samples.  James and I had Vegan Mayo on our grocery list so we were keeping our eyes out for any at the expo, and the man at the kiosk generously gave us a jar.  We tried some that evening in our chickpea salad sandwiches and I can say that it is very good!  What sets it apart from the other vegan mayo we’ve tried are the ingredients; there are no weird fillers, no hydrogenated oils and no palm oil.  The Mystery Nut butter is by Artisans Way Organics, a local BC company.  They had so many delicious products, like Chocolate Peanut and Chocolate Hazelnut spread, as well as some raw chocolate that was super tasty.  I could’ve spent way more money there, but unfortunately by the time I got to their kiosk, I was almost out of cash!  This Mystery butter is made up of five different nuts, one of which is Tiger nut (actually a root) and sweetened with dates.  Can’t wait to have this with some Gala apple slices! 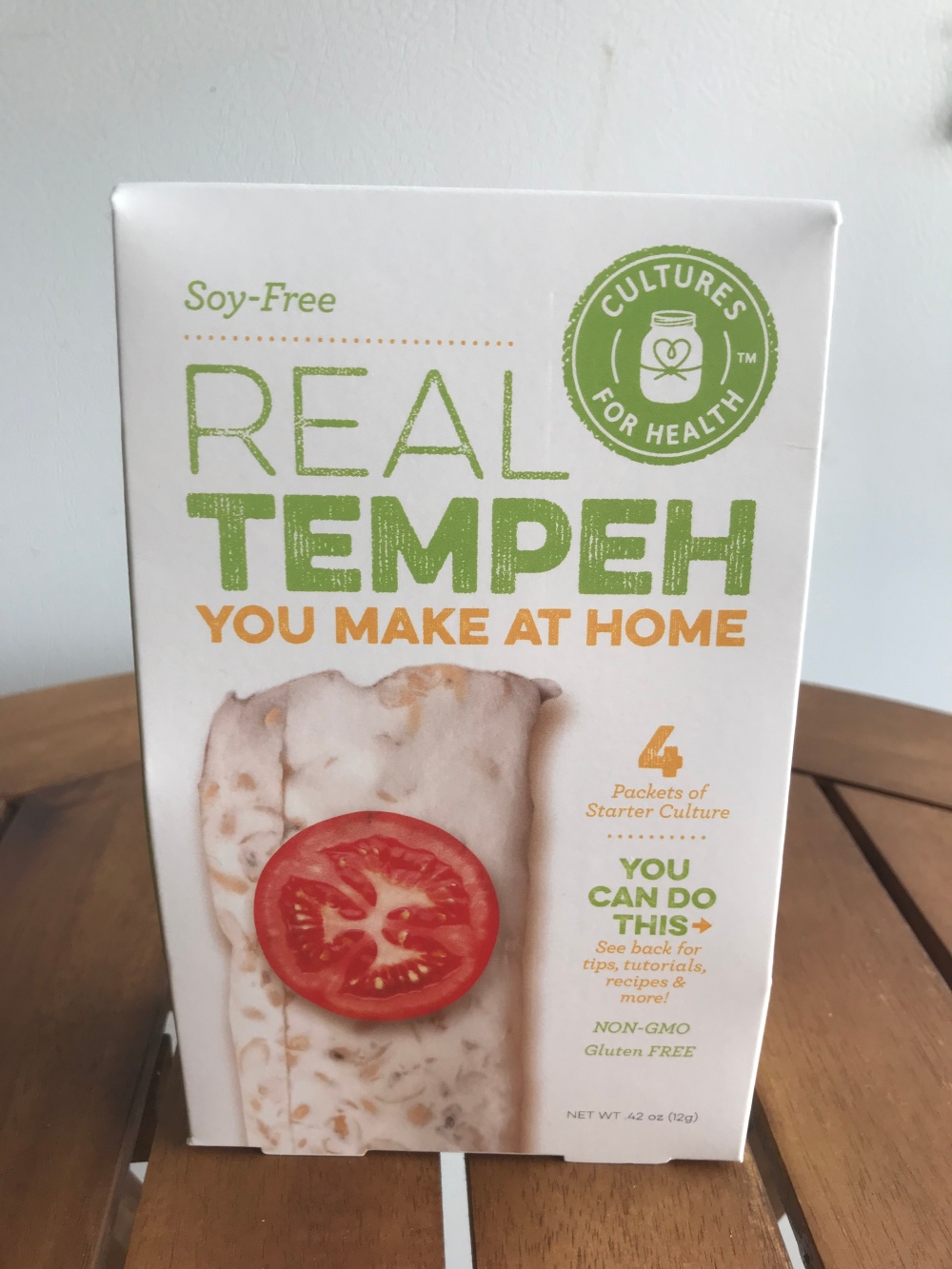 This is the year of tempeh for me!  I didn’t really like it the first couple times I tried it.  The first time I had it, it was pre-made tempeh maple bacon and I just wasn’t really a fan.  I think we bought it quite early on in on when we transitioned to a vegan diet and were expecting something that tasted like bacon, and it just didn’t… I wasn’t used to the slight bitterness of tempeh.  Now that I’ve been vegan for over two years, I know my taste buds have definitely changed and I don’t mind that taste at all but more importantly I know how to prepare tempeh properly now and don’t rely on pre-made, pre-seasoned versions of it.  This Cultures For Health package contains the cultures to ferment your own tempeh using a variety of different types of beans, not just soy.  We haven’t cracked this open yet, so I will write an updated post once we try our hand at making our own tempeh!  Funnily enough, I saw this Tempeh kit two days after going to the Expo at Vitasave, so if you’re looking to try it out yourself, you can find it there. 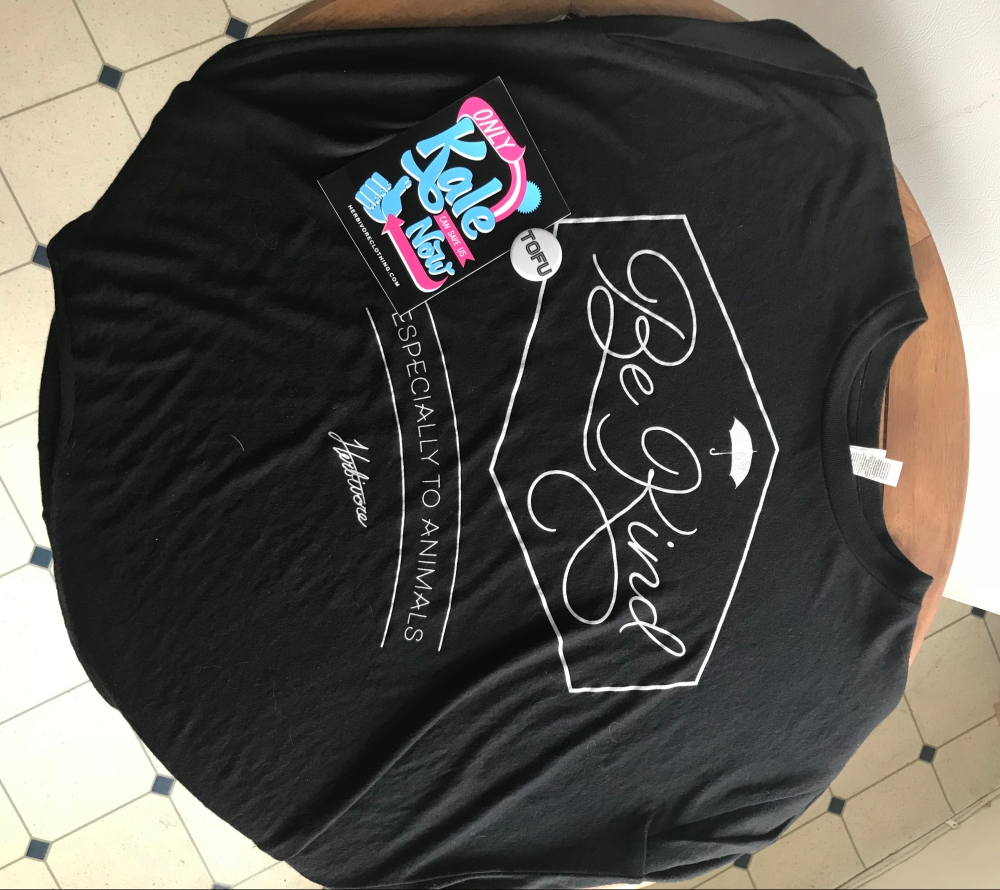 Unlike last year, we came home with some clothing and accessories!  James got a t-shirt that says Vegan in some Slayer looking font, but he was actually wearing the shirt when I was taking the photos of our haul.  I got this Be Kind shirt from Herbivore, a Portland based Vegan Clothing and accessories brand, and I love it!  It’s SO soft and comfy.  I wore it for three days this week before tossing it in the wash, haha.  We also got some a TOFU pin and a Hail Seitan pin.  James also picked up the Only Kale Can Save Us Now sticker.  We bought the clothing and pins at the Vegan Supply booth.

That wraps up my Veg Expo 2018 haul.  The only thing I wish we would’ve bought are vegan cheeses!  The only reason why we didn’t end up picking up any of the vegan cheeses were pretty much because the lines were so long at all the cheese places.  Makes sense, every vegan wants a good vegan cheese.  Anyway, that’s all from me today!  Thanks for reading 🙂